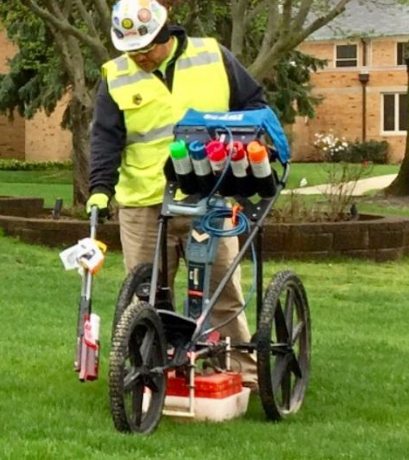 GPRS was recently contacted by a large private institution in the Detroit, Michigan area for a major sprinkler renovation. The facilities department stated that over the past several years multiple contractors have had numerous line strikes damaging several areas containing underground utilities. After meeting with a GPRS consultant they decided that not only was it a good idea to have several areas scanned but to have a full site utility locate and have GPRS provide them with a CAD map of the entire 17-acre facility. That not only would prevent damage to the underground infrastructure but also be a great tool going forward to add to and assist in any future excavations.

The private institution has served the Dearborn, MI area for over six decades and has been driving excellence in education. The institution has provided young men and women with an excellent private education. They have taken on the responsibility to nurture the growth of students spiritually, academically, creatively, and socially. The institution first opened its doors in December 1952. It all started with an elementary school, and now spans over 17 acres with a middle school, high school, auditorium, and a beautiful church making it a sprawling private community. And the site is a piece of art in itself with gorgeous landscaping, prayer gardens, several statues and even a coy pond. And in 2016 they also added a state-of-the-art track and football field spanning over 5 acres, and are prepared to add on in the near future when needed.

Once GPRS arrived on site, the scope of locating a 1950’s facility proved challenging. The institution has over eight buildings and all have had several additions and infrastructure changes for over 60 years. Locating the entire underground infrastructure becomes a daunting task. There were no records of any existing utilities. And figuring out the six major utilities Power, Communications, Gas, Water, and Sewer and Storm systems to each building becomes a huge challenge. There was also Site lighting, landscape lighting, and little power conduits everywhere. And locating the existing sprinkler system was a huge undertaking. And providing an accurate up to date CAD map of the entire facility. It was a Great challenge and an awesome feeling of accomplishment when it was completed in its entirety and ahead of schedule.

GPRS takes great pride in being the nation’s best utility locating, and Concrete scanning company. We have the ability to reduce and mitigate risk on any project, and GPRS was one of the first companies to focus on concrete scanning and utility locating, primarily using ground penetrating radar. By utilizing ground penetrating radar and electromagnetic technologies, we are confident in identifying the location of known and unknown subsurface utilities and infrastructures. And GPRS has new cutting edge technologies in our rapid on site mapping capabilities. We are the best at what we do because it’s all we do. When you are faced with the need to know what’s below the surface, please contact the nation’s best - GPRS. 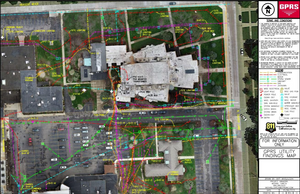