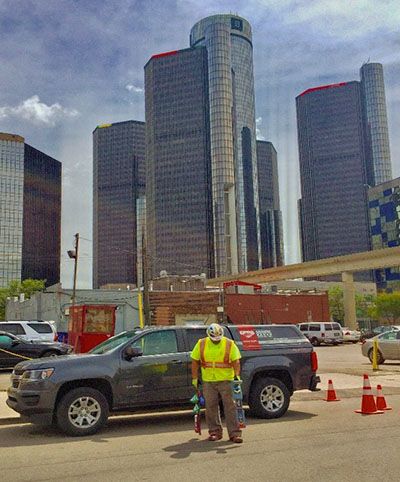 DTE was founded in 1849 and is one of the nation’s largest natural gas utilities. The corporate headquarters is located at One Energy Plaza in Detroit Mi. DTE is a Detroit based diversified energy company involved in the development and management of energy related business’s nationwide. The company services 3.5 million customers in Southeastern Michigan. The entire DTE footprint spans 25 states in the U.S and has more than 10,000 employees. DTE’S year to date numbers range over $11 Billion net income and has approximately over $35 Billion in assets.

Mike Garcia, a Project Manager in Southeast Michigan for GPRS was called exclusively to assist in another major pipe replacement of a 22” high pressure gas main. The scope of the work consisted of locating and verifying all findings through the heart of Detroit, MI. Starting at Cobo Hall and traveling down Larned Street all the way to I-75, the length of this project was approximately 1 mile in length and close to 10 city blocks. It’s part of an ongoing gas main replacement. As part of the city of Detroit’s reconstruction of the gas mains infrastructure. GPRS teamed up with DTE’s Gas division, several local contractors, and city officials to tackle this huge task.

GPRS has visited the Larned Street site on many occasions to keep up with the high demands and project timeframes. Working at all different times including nights, weekends, and day and evening shifts. Marking out all kinds of findings including, wooden gas mains going back a hundred years. Many miscellaneous pipes, gas mains, gas services, power and communication manhole systems, street lights, various fiber-optics, water, and sewer leads and all types of various unknowns, including old railroad system’s that if went undetected could have caused the excavating contractors lost time, not to mention high profile damages.

DTE has a full schedule for the Larned Street project as it’s an ongoing task excavating through one of the main streets in downtown Detroit. Safety is one of the contractor’s main concerns, and hiring a local traffic control contractor on the job was needed to mitigate the risk of vehicle accidents. In addition to utilizing GPRS’s surface locating services, DTE needed to hire a vacuumed truck contractor to expose everything in the projects path. It was common for the excavation to cross sometimes multiple sections of main utilities, and sometimes having to go back and reconfigure the projects path and direction.

This wasn’t the first time GPRS was asked to assist in one of DTE’S major projects. GPRS first teamed up with DTE in the fall of 2016 for a gas main replacement project at the St Joe’s hospital in Ann Arbor, MI. The scope of the project was to install a new 10” gas main around the entire hospital and tie into the facility in three areas. The length of the project was approximately 6,000 linear ft. After the project was completed ahead of schedule, and without incident, DTE was on board with GPRS and a great working relationship was formed.

In the summer of 2017 GPRS got a second call to start the beginning stages of a monumental project known as the Gordie Howe International Bridge. Spanning from the American side of the Detroit River to across the river into Canada, the project was proposed to take 5 years to complete. It consists of a major re-build of the city’s highways and overpasses. DTE is playing a vital role in moving several of the city’s utility infrastructures and re-routing several areas for the construction just to begin. The project is well underway and is going to not only change the the city’s entire skyline but bring thousands of jobs to the city, and be an epic achievement.

GPRS is the nation’s largest company specializing in the detection of underground utilities, and concrete scanning. GPRS continues to be the Industry’s leader, by providing outstanding service, constant communication, combined with cutting edge technology. Keeping projects on time, reducing safety risks, and putting our relationships with our clients before profit.