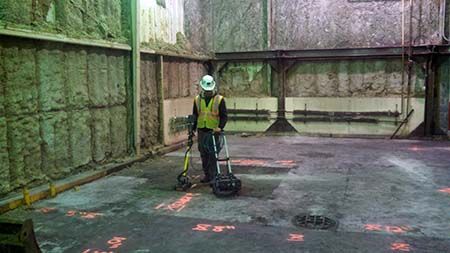 Locate Embedded/Underground Conduits Prior to Saw Cutting Inside Warehouse

Anytime saw cutting is to take place it’s imperative to locate any conduits/pipes that may be embedded or just beneath the concrete slab. By having information as to what is below surface will allow the saw cutters to proceed with confidence that they won’t compromise any existing utilities. Ground Penetrating Radar & Radio Detection when operated by trained professionals helps to promote a safe working environment for all teams involved in the demolition process. 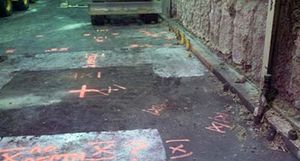 A demolition company had a project inside a warehouse in Ferndale, MI where they needed to saw cut the existing concrete slab to repair some areas of the floor. They could see pipes extending out from the concrete slab in the room where the saw cutting was needed. Before any demolition could get started it was imperative they had more information as to where the pipes were crossing within the warehouse room. Ground Penetrating Radar Systems of Michigan was contacted to scan the slab to help identify where the pipes were heading & also any other utilities that may have been passing through to other rooms. GPRS mobilized to the site to perform the investigation using a 1600 MHz high-resolution GPR antenna along with a radio detection device. The methods used by GPRS allowed them to mark the underground pipes directly on the surface in real time displaying where the pipes were crossing through. After completing the concrete investigation, GPRS walked the area with the on-site contact to explain the markings. The demo company now had the information needed to continue the project without hesitation.

A safe working environment is extremely important. Before your next demolition project in Michigan, contact Regional Manager Thaddeus Bullock at (734) 377-4551 or thaddeus.bullock@gprsinc.com to locate any existing underground utilities.