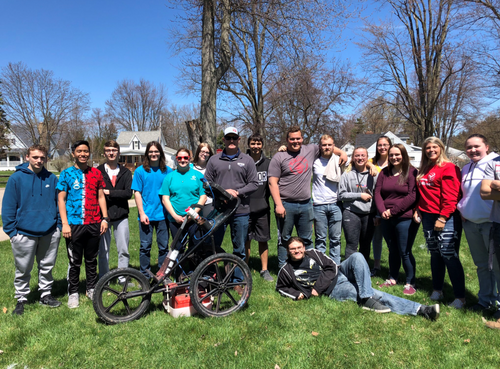 GPRS was first contacted by Paula McElroy, history and social studies teacher at Marlette High School in Marlette, Michigan. Paula teaches one of the only high school archaeology classes in the state. Her request was to use ground penetrating radar (GPR) to scan a few select areas around the high school known to contain historical artifacts.

The current building has been used as the high school since its construction in 1967. But, the site was first developed as early 1858 and has several documented historical “sites” on the property. Marlette was first settled in the mid-19th century by people from Ontario who sought tall timber and fertile soil. The city got its name from the family of settlers, "Marlatt" who carved their name on a log shanty. It is known as "The Heart of the Thumb" due to its location in Michigan and considered a part of the Flint/Tri-Cities region.

Each year students are required to conduct an archaeological dig and write a report on their findings. The class was interested in using GPR to help identify shallow targets that could later be exposed and documented for their reports.

Paula contacted me in January about coming out to the school and speaking to the class. A date was scheduled in the spring once the weather was suitable to provide an on-site demonstration for the archeology class. After, a brief presentation about GPRS the company and explaining how GPR works by sending pulses of energy into a material and recording the strength and the time required for the return of the reflected signal. Reflections are produced when the energy pulses enter into a material with different electrical properties from the material it left. The strength of the reflection is determined by the contrast in signal speed between the two materials.

I then used the 400 MHz GPR antenna to scan the selected areas. This antenna is mounted in a stroller frame which rolls over the surface. This was ideal because the surface was reasonably smooth and unobstructed. The total GPR depth penetration for this site was approximately 4 feet below grade surface. Initial GPR scans were collected in order to evaluate the data and calibrate the equipment. Based on these findings, a scanning strategy was formed, consisting of scanning the entire areas in a grid with 3-foot scan spacing in order to locate any potential shallow targets that may remain at the site. The GPR data was interpreted in real time for the students and teachers and anomalies were located and marked on the surface along with their depths using spray paint.

The students and faculty were very excited to learn about GPR technology. I located several shallow targets for the students during the hour long demonstration. The students asked lots of questions and couldn’t wait to get out the shovels and begin their archeological digs. 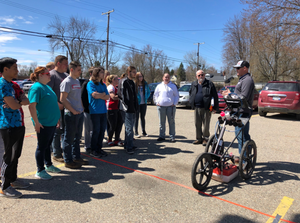 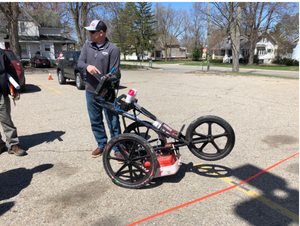